If you’re reading this, you may have found some strange-looking equipment on a beach!

On North Beach on Calvert Island, and on other beaches on the central coast of British Columbia, you’ll find many kinds of invertebrates flying, running, and hopping about: beach hoppers, spiders, flies, beetles, and other insects.

A beach hopper: a type of amphipod that feeds on seaweed wrack.

I am using the equipment set up on Calvert Island in an experiment to find out how these invertebrates affect the nutrients in beach sand.

Many little land-dwelling bugs feed on the seaweed or “wrack” that washes up on shorelines. They’re an important first step in the decomposition process, and help add nutrients and organic matter to the sand that can can be used by other smaller animals, and by plants. 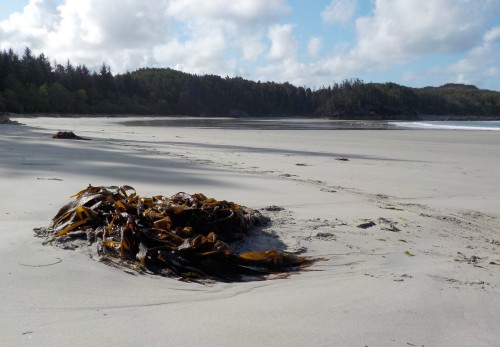 A tangle of Giant Kelp deposited on West Beach during the recent high tide.

This experiment is split into 8 blocks of 6 plots with different seaweed and invertebrate treatments. Some have no seaweed, while others have “moderate” or “high” amounts of seaweed. Half of the plots allow invertebrates to access, feed on, and break down the seaweed, and the other half have white mesh cages that keep the bugs off the seaweed. All of the plots are surrounded by chicken wire, in the hopes that curious ravens and wolves (and two-legged beach-goers!) won’t disturb them too much.

A plot with “moderate” wrack and open access to invertebrates. The green device in the middle of the seaweed takes regular measurements of sunlight and temperature.

To make sure that all of the plots were as similar as possible before starting the experiment, Sean and I dug out the sand in each plot to a depth of 12″, sifted it to remove the invertebrates and get rid of sticks and bits of old seaweed, mixed it up, and put it back in the holes. For the “no-invertebrate” plots, we put the mesh cages in first, so that the sand and wrack would get full-surround protection from the bugs. Here’s a video of the work involved in setting up just one of the 8 blocks:

By collecting sand samples every month and seeing how the nutrients change over time, I’ll be able to figure out what invertebrates do to the sand when the waves and tides dump different amounts of wrack on the beach. 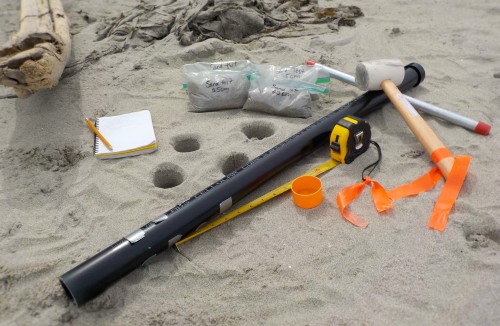 A sand corer made from pipe used to collect samples

At the end of the summer, I’m also going to collect some sand from each plot and bring it back to Simon Fraser University. In a greenhouse, I’ll plant seeds harvested from different plants growing on the beach. A few months later, I’ll see how many sprouted, and how big and healthy the plants get. This will tell me if the wrack breakdown caused by invertebrates is important for plants that are trying to grow on what is otherwise pretty nutrient-poor substrate. Beaches are challenging places to set root if you’re a plant!

Ultimately, this study will help me figure out one important step in the complex system of processes that allows nutrients from the ocean to supplement life on land.